OUR LATEST
Send Your Awesome 2020 Graduation Portraits To Space
Powerful Graduation Portraits In The Time Of Covid...
Why You Should Get A Professional Headshot
Become a Model interview with The Becky in...
Awesome Ariana Grande at Lloyd’s Studio
President Lincoln’s Professional Head-Shots
Ugly Christmas Sweater Family Portrait
Family Portraits at The Carousel
Senior Portrait Challenge 2018
Online Dating Photo Tips

Corporate Group Photos are often created along with executive portraits and other corporate photography.  Group shots are useful to show teamwork, for team-building purposes when execs are scattered over multiple offices, and for historical documentation purposes. Call or email us today to book your appointment.

“Our Law firm is very pleased with Lloyd’s Studio.  Michael and Elizabeth are a great team, their experience, teamwork and attention to detail make you comfortable and confident.  They have a keen ability to capture the right shot. They are timely, professional and accommodating to our needs.”

Click on the first thumbnail below to start a full-screen gallery. Use left/right arrow keys to navigate or swipe on iPad screen.  To return, click on the (x) button in the upper right corner, or hit an ESC key. 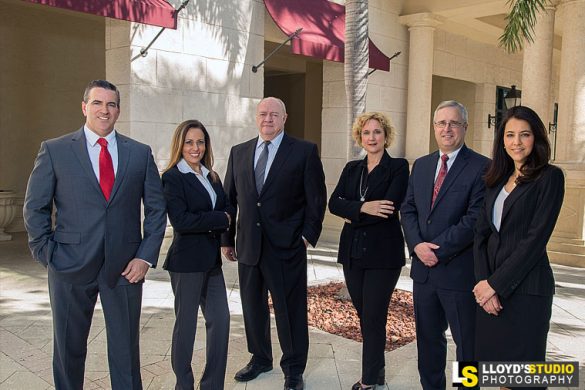 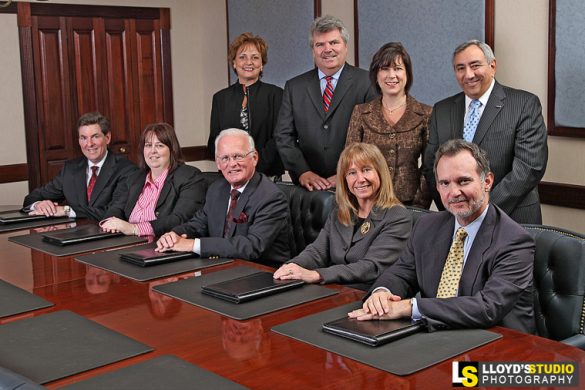 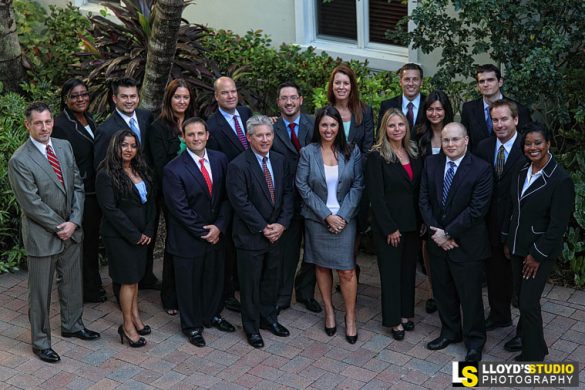 Corporate Group Photos: Are They a Challenge?

Corporate Group Photos vary widely.  In order to achieve useful and effective results, careful planning is a must.  Below are common challenges and issues that you want to think about.

The space should be large, both in width and depth, to accommodate people without overlapping much, and enough distance for camera placement.  The backdrop needs to be non-distracting because it will be in rather sharp focus (shallow depth of field does not work for Corporate Group Photos).  Just because space can hold all the people, it doesn’t mean large enough.  Individuals who stand near either side of the picture tend to look bigger (wider) than the individuals who position near the center.  This phenomenon amplifies when the space is not large enough.  The space should receive no direct sunlight.

The way people are assembled determines the shape of the picture.  There is little room for cropping to force into a shape and size allocated on the layout unless you plan carefully or have complete freedom in layout.  (If the group is less than eight people and space is very large, we can arrange people in a single row, in which case there is more cropping freedom. This configuration works best for horizontally wide space on modern design websites.)

A group shot means people are either assembled in a row, rows, or in the case of very many people, scattered randomly. Except for the last, the pictures will look rather formal, which works for industries where traditional and conservative look works.  Scattered group shots are good for a more organic and active look and are less formal, they are common  for  consumer-oriented industries.

You might have seen a clean, slick, modern looking Corporate Group Photos in corporate col-laterals or professionally designed websites.  Many of those shots are stock images taken by carefully assembling models on a studio set.  In reality, your employees are likely to have more variations in their heights and body shapes, and your office space is a lot smaller with a lower ceiling, limiting lighting options.  So, when you plan a group shot, refer to real group shots of real companies (like samples you see on this page).

We’ve seen cases where a company shot many group shots but used only some or none at all because they didn’t want any image of fired former employees on their website.  A similar issue arises when new employees join after shooting.

Trying to get many people in one place simultaneously requires a lot of patience from each member of the group.  Then we need to get a picture where most people’s facial expressions are nice, or at least, with eyes open. That is not easy.

There may be missing execs who can’t make the shoot day.  If it’s just a headshot, we can do a makeup session, but it is impossible for a group shot.

The best way to have a successful group shot is to plan ahead.  If you have any questions, we are available to discuss.

Corporate Group Photos: DON’T HAVE THE RIGHT SETTING, BACKGROUND OR LOCATION?  WE DO!

Does your location not cut it?  We can create your images in our studio or our real boardroom business setting.  We can also take advantage of the REAL surroundings just outside our studio, which include columns, greenery and other outdoor REAL settings.  No fake funky green screen here!